intrigue
Something fascinating or alluring can be called “intriguing,” but “intrigue” as a noun means something rather different: scheming and plotting. Don’t say people or situations are full of intrigue when you mean they are intriguing. The name of the Oldsmobile car model called the Intrigue is probably based on this common confusion. 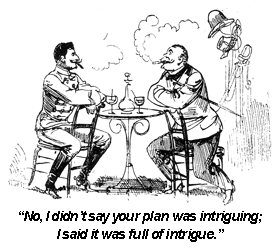