cursing through veins
To course is to run. The most familiar use of this meaning of the word is in “racecourse”: a place where races are run. When the blood runs strongly through your veins, it courses through them. Metaphorically we speak of strong emotions like fear, exhilaration, and passion as coursing through our veins.

Some people mistakenly substitute “curse” and think these feelings are cursing through their veins. This might make some sort of sense with negative emotions, but note that the expression is also used of positive ones. Stick with coursing.
Posted by Tom at 12:00 AM No comments:

hence why/hence
Shakespeare and the Bible keep alive one meaning of the old word “hence”: “away from here” (“get thee hence”). There’s no need to add “from” to the word, though you often see “from hence” in pretentious writing, and it’s not likely to bother many readers.

cut and dry/cut and dried
Many people mishear the standard expression meaning “set,” “not open to change,” as “cut and dry.” Although this form is listed in the Oxford English Dictionary, it is definitely less common in sophisticated writing. The dominant modern usage is “cut and dried.” When used to modify a noun, it must be hyphenated: “cut-and-dried plan.”
Posted by Tom at 12:00 AM No comments:

furl/furrow
When you concentrate really hard so that furrows appear in your forehead, you furrow your brow—an expression that means “worry, puzzle over.” When you lower a sail and wrap it tightly around the mast to secure it you furl it. If you can furl your brow you belong in a sideshow.

card shark/cardsharp
Although he may behave like a shark, the slick, cheating card player is a “cardsharp.” 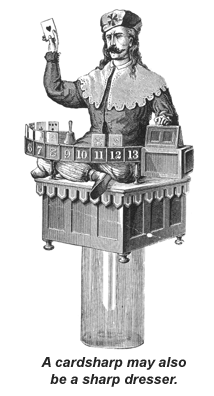 grill/grille
You cook on a grill (perhaps in a “bar and grill”), but the word for a metal framework over the front of an opening is most often grille. When speaking of intensive questioning “grill” is used because the process is being compared to roasting somebody over hot coals: “whenever I came in late, my parents would grill me about where I’d been.”

The popular saying “I shoulda stood in bed” conjures up an amusing image, but it’s not a model for standard usage.

bouyant/buoyant
Buoys are buoyant. In the older pronunciation of “buoyant” as “bwoyant” this unusual spelling made more sense. Now that the pronunciation has shifted to “boyant” we have to keep reminding ourselves that the U comes before the O. The root noun, however, though often pronounced “boy” is more traditionally pronounced “BOO-ee.”

affect/effect
There are five distinct words here. When “affect” is accented on the final syllable (a-FECT), it is usually a verb meaning “have an influence on”: “The million-dollar donation from the industrialist did not affect my vote against the Clean Air Act.”

Occasionally a pretentious person is said to affect an artificial air of sophistication. Speaking with a borrowed French accent or ostentatiously wearing a large diamond ear stud might be an affectation. In this sort of context, “affect” means “to make a display of or deliberately cultivate.”

Another unusual meaning is indicated when the word is accented on the first syllable (AFF-ect), meaning “emotion.” In this case the word is used mostly by psychiatrists and social scientists—people who normally know how to spell it.

The real problem arises when people confuse the first spelling with the second: “effect.” This too can be two different words. The more common one is a noun: “When I left the stove on, the effect was that the house filled with smoke.” When you affect a situation, you have an effect on it.

The less common is a verb meaning “to create”: “I’m trying to effect a change in the way we purchase widgets.” No wonder people are confused. Note especially that the proper expression is not “take affect” but “take effect”—become effective. Hey, nobody ever said English was logical: just memorize it and get on with your life.

The stuff in your purse? Your personal effects.

The stuff in movies? Sound effects and special effects.
Posted by Tom at 12:00 AM No comments:

eponymous/self-titled
It has become popular among certain critics to call recordings named after their performing artists “eponymous.” Thus the album by the Beatles titled The Beatles would be an eponymous album. (Don’t remember it? It’s the one most people call The White Album; the title was embossed on the cover rather than printed on it.) This pretentious term is not only so obscure as to be almost useless, these writers are not using it in its original sense; it was the person who was eponymous, not the thing named after the person. I prefer the usage of critics who call such recordings “self-titled.” It’s an awkward phrase, but at least it’s easy for the reader to figure out what is meant.

baldfaced, boldfaced/barefaced
The only one of these spellings recognized by the Oxford English Dictionary as meaning “shameless” is “barefaced.” Etymologies often refer to the prevalence of beards among Renaissance Englishmen, but beards were probably too common to be considered deceptively concealing. It seems more likely that the term derived from the widespread custom at that time among the upper classes of wearing masks to social occasions where one would rather not be recognized.

_________________
Today's entry is an example of an eggcorn, which Paul Brians writes about in his latest blog entry.
You can read an interesting history of the term here.
Posted by Tom at 12:00 AM No comments:

liquor
Although it may be pronounced “lik-ker,” you shouldn’t spell it that way, and it’s important to remember to include the U when writing the word.

strength
It is nonstandard to pronounce “strength” as if it were spelled “strenth.” The same goes for “length.” Make sure to sound the “eng” in the middle of these words.
Posted by Tom at 12:00 AM No comments:

their's
Like the related possessive pronouns “ours,” “his” and “hers” “theirs” does not take an apostrophe.

reap what you sew/reap what you sow
When you plant seeds you sow them. Galatians 6:7 says, “A man reaps what he sows” (harvests what he plants, gets what he deserves). This agricultural metaphor gets mangled frequently into “you reap what you sew.” At best, you might rip what you sew; but you probably wouldn’t want to tell people about it.

dialogue/discuss
“Dialogue” as a verb in sentences like “The Math Department will dialogue with the Dean about funding” is commonly used jargon in business and education settings, but abhorred by traditionalists. Say “have a dialogue” or “discuss” instead.

grasping for straws/grasping at straws
To grasp at straws is to make desperate but futile attempts to escape from a problem. The image is of a drowning person wildly thrashing about trying to find something to keep afloat with, madly grasping even a wisp of straw which is plainly incapable of doing the job. “Grasping for straws” suggests that the person is deliberately trying to find straws rather than blindly grabbing them.

bumrush/bum’s rush
A 1987 recording by the rap group Public Enemy popularized the slang term “bumrush” as a verb meaning “to crash into a show hoping to see it for free,” evidently by analogy with an earlier usage in which it meant “a police raid.” In the hip-hop world to be “bumrushed” (also spelled as two words) has evolved a secondary meaning, “to get beaten up by a group of lowlifes, or ‘bums.’” However, older people are likely to take all of these as mistakes for the traditional expression “bum’s rush,” as in “Give that guy the bum’s rush,” i.e., throw him out unceremoniously, treating him like an unwanted bum. It was traditionally the bum being rushed, whereas in the newer expressions the bums are doing the rushing. It’s good to be aware of your audience when you use slang expressions like this, to avoid baffling listeners.

avaidable/available
Many people mispronounce and misspell “available” as “avaidable,” whose peculiar spelling seems to be influenced by “avoidable,” a word which has opposite connotations.

“Avaidable” is avoidable; avoid it.
Posted by Tom at 12:00 AM No comments:

take and
In some dialects, it’s common to emphasize an action by preceding the verb with “take and” (past tense “took and”): “When he got mad he would take and pound his fist into the wall.” This expression is not used in formal English, and usually occurs in writing only when the author is trying to convey an impression of unsophisticated speech.

from . . . to
“From soup to nuts” makes sense because soup was the traditional first course in a formal meal, nuts the last. Similarly “from A to Z” makes sense because these are the first and last letters of the alphabet. But this construction, which identifies the extremes of a spectrum or range, is often improperly used when no such extremes are being identified, as in “She tried everything from penicillin to sulfa drugs.” These are not extremes, just examples of different sorts of drugs. Even worse is “He gave his daughter everything from a bicycle to lawn darts to a teddy bear.” A range can’t have more than two extremes. “He gave his daughter everything from paper dolls to a Cadillac” conveys the notion of a spectrum from very cheap to very expensive and is fine. Often when people are tempted to use “from . . . to” they would be better off using a different expression, as, for example, in this sentence: “She tried all sorts of medicines, including penicillin and sulfa drugs.”
Posted by Tom at 10:59 AM No comments:

undo/undue
The noun “undo” is the opposite of “do.” You undo your typing errors on a computer or undo your shoelaces to go wading.

The adjective “undue” is the opposite of “due” and means “unwarranted” or “improper.” It is used in phrases like “undue influence,” “undue burdens,” and “undue expense.”

___________
The story is about what? Paul Brians' latest blog post discusses the difficulty of constructing a headline.
Posted by Tom at 12:00 AM No comments:

jewelry
Often mispronounced “joolereee.” To remember the standard pronunciation, just say “jewel” and add “-ree” on the end. The British spelling is much fancier: “jewellery.”

shear/sheer
You can cut through cloth with a pair of shears, but if the cloth is translucent it’s sheer. People who write about a “shear blouse” do so out of sheer ignorance.

ignorant/stupid
A person can be ignorant (not knowing some fact or idea) without being stupid (incapable of learning because of a basic mental deficiency). And those who say, “That’s an ignorant idea,” when they mean “stupid idea” are expressing their own ignorance.