majority are/majority is
“Majority” is one of those words that can be either singular or plural. Common sense works pretty well in deciding which. If you mean the word to describe a collection of individuals, then the word should be treated as plural: “The majority of e-mail users are upset about the increase in spam.” If the word is used to describe a collective group, then consider it singular: “A 90% majority is opposed to scheduling the next meeting at 6:00 AM.” If you are uncertain which you mean, choose whatever form sounds best to you; it’s not likely to bother many people.
Posted by Tom at 12:00 AM No comments:

Ghandi/Gandhi
Mohandas K. Gandhi’s name has an H after the D, not after the G. Note that “Mahatma” (“great soul”) is an honorific title, not actually part of his birth name. The proper pronunciation of the first syllable should rhyme more with “gone” than “can.” Among Indians, his name is usually given a respectful suffix and rendered as Gandhiji, but adding Mahatma to that form would be honorific overkill.
Posted by Tom at 12:00 AM No comments:

greatful/grateful
Your appreciation may be great, but you express gratitude by being grateful.

exponential
Something grows exponentially when it repeatedly grows by multiples of some factor in a rapidly accelerating fashion. Don’t use the word loosely to refer to ordinary rapid, but steady, growth.

for goodness’ sakes/for goodness’ sake
Picky folks point out that since the mild expletive “for goodness’ sake” is a euphemism for “for God’s sake” the second word should not be pluralized to “sakes”; but heavens to Betsy, if little things like that are going to bother you, you’ll have your dander up all the time.

artic/arctic
Although some brand names have incorporated this popular error, remember that the Arctic Circle is an arc. By the way, Ralph Vaughan Williams called his suite drawn from the score of the film Scott of the Antarctic the Sinfonia Antartica, but that’s Italian, not English.
Posted by Tom at 12:00 AM No comments:

dateline/deadline
The word “dateline” is used today mainly to label the bit of text at the top of a printed news story that indicates where and—often, but not always—when it was written. For instance, after a headline about events in Kenya, the dateline might read “NAIROBI, Kenya, June 2, 2010.”

Probably because this rather obscure word has been popularized by its use for the name of an NBC television news show, some people confuse it with “deadline,” which is most often the date by which something must be accomplished. You can miss deadlines, meet deadlines, or have to deal with short deadlines—but not datelines.
Posted by Tom at 12:00 AM No comments:

ongoingly/currently, continuously
“Ongoingly” is not standard English. When something is occurring in an ongoing manner, you can speak of it as happening “currently” or “continuously.”
Posted by Tom at 12:00 AM 3 comments:

refute/reject
To refute someone’s argument is to prove it incorrect. If you attempt no such proof but simply disagree with an argument the word you want is “reject.”
Posted by Tom at 12:00 AM No comments:

volumn/volume
There are a few unusual words in English ending in MN in which the N is silent, such as “hymn” and “column,” but “volume” is not one of them.
Posted by Tom at 12:00 AM 3 comments:

verse/play against
Some young people use “verse” as a verb meaning “to play against,” as in “I’ll verse you at basketball after school.” Computer gamers are particularly fond of virtual opponents versing each other. Presumably this bit of slang derives from the word “versus,” but it’s not standard English and is likely to confuse outsiders.

gander/dander
When you get really angry you “get your dander up.” The derivation of “dander” in this expression is uncertain, but you can’t replace it with “dandruff” or “gander.” The only way to get a gander up is to awaken a male goose.
Posted by Tom at 12:00 AM No comments:

360 degrees/180 degrees
When you have turned 360 degrees you’ve completed a circle and are back where you started. So if you want to describe a position that’s diametrically opposed to another, the expression you want is not “360 degrees away” but “180 degrees away.”
Posted by Tom at 12:00 AM No comments:

who/whom
“Whom” has been dying an agonizing death for decades—you’ll notice there are no Whoms in Dr. Seuss’s Whoville. Many people never use the word in speech at all. However, in formal writing, critical readers still expect it to be used when appropriate. The distinction between “who” and “whom” is basically simple: “who” is the subject form of this pronoun and “whom” is the object form. “Who was wearing that awful dress at the Academy Awards banquet?” is correct because “who” is the subject of the sentence. “The M.C. was so startled by the neckline that he forgot to whom he was supposed to give the Oscar” is correct because “whom” is the object of the preposition “to.” So far so good.

Now consider this sort of question: “Who are you staring at?” Although strictly speaking the pronoun should be “whom,” nobody who wants to be taken seriously would use it in this case, though it is the object of the preposition “at.” “Whom” is very rarely used even by careful speakers as the first word in a question, and many authorities have now conceded the point.

There is another sort of question in which “whom” appears later in the sentence: “I wonder whom he bribed to get the contract?” This may seem at first similar to the previous example, but here “whom” is not the subject of any verb in the sentence; rather it is part of the noun clause which itself is the object of the verb “wonder.” Here an old gender-biased but effective test for “whom” can be used. Try rewriting the sentence using “he” or “him.” Clearly “He bribed he” is incorrect; you would say “he bribed him.” Where “him” is the proper word in the paraphrased sentence, use “whom.”

Instances in which the direct object appears at the beginning of a sentence are tricky because we are used to having subjects in that position and are strongly tempted to use “who”: “Whomever Susan admired most was likely to get the job.” (Test: “She admired him.” Right?)

Confused? Just try the “he or him” test, and if it’s still not clear, go with “who.” You’ll bother fewer people and have a fair chance of being right.

Scotch free/scot free
Getting away with something “scot free” has nothing to do with the Scots (or Scotch). The scot was a medieval tax; if you evaded paying it you got off scot free. Some people wrongly suppose this phrase alludes to Dred Scott, the American slave who unsuccessfully sued for his freedom. The phrase is “scot free”: no H, one T.

sulking/skulking
That guy sneaking furtively around the neighborhood is skulking around; that teenager brooding in his bedroom because he got grounded is sulking. “Sulking around” is not a traditional phrase. 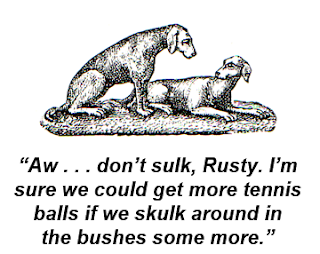 defamation/deformation
Someone who defames you, seeking to destroy your reputation (making you ill-famed), is engaging in defamation of character. Only if someone succeeded in actually making you a worse person could you claim that they had deformed your character.
Posted by Tom at 12:00 AM No comments:

Church/church
Catholics routinely refer to their church as the Church, with a capital C. This irritates the members of other churches, but is standard usage. When “Church” stands by itself (that is, not as part of a name like “First Methodist Church”), capitalize it only to mean “Roman Catholic Church.” Note that protestant theologians and other specialists in religion do refer to the whole body of Christians as “the Church,” but this professional usage is not common in ordinary writing.

bonafied/bonafide
Bona fide is a Latin phrase meaning “in good faith,” most often used to mean “genuine” today. It is often misspelled as if it were the past tense of an imaginary verb: “bonafy.”

next store/next door
You can adore the boy next door, but not “next store.”

yea/yeah/yay
“Yea” is a very old-fashioned, formal way of saying “yes,” used mainly in voting. It’s the opposite of—and rhymes with—“nay.” When you want to write the common casual version of “yes,” the correct spelling is “yeah” (sounds like “yeh”). When the third grade teacher announced a class trip to the zoo, we all yelled “yay!” (the opposite of “boo!”). That was back when I was only yay big.
Posted by Tom at 12:00 AM 1 comment:

supposably, supposingly, supposively/supposedly
“Supposedly” is the standard form. “Supposably” can be used only when the meaning is “capable of being supposed,” and then only in the US. You won’t get into trouble if you stick with “supposedly.”
Posted by Tom at 12:00 AM 1 comment:

Is this mistake influenced by the expression “the cut of his jib” or is it just a goofy typo?
Posted by Tom at 12:00 AM 1 comment:

allusion/illusion
An allusion is a reference, something you allude to: “Her allusion to flowers reminded me that Valentine’s Day was coming.” In that English paper, don’t write “literary illusions” when you mean “allusions.” A mirage, hallucination, or magic trick is an illusion. (Doesn’t being fooled just make you ill?)
Posted by Tom at 12:00 AM 2 comments: