lay/lie
You lay down the book you’ve been reading, but you lie down when you go to bed. In the present tense, if the subject is acting on some other object, it’s “lay.” If the subject is lying down, then it’s “lie.”

This distinction is often not made in informal speech, partly because in the past tense the words sound much more alike: “He lay down for a nap,” but “He laid down the law.” If the subject is already at rest, you might “let it lie.”

If a helping verb is involved, you need the past participle forms. “Lie” becomes “lain” and “lay” becomes “laid”: “He had just lain down for a nap,” and “His daughter had laid the gerbil on his nose.” 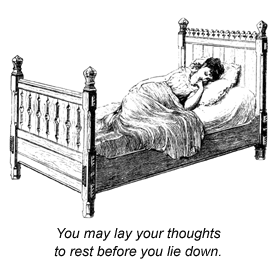