joint possessives
When writing about jointly owned objects, people often fret about where to place apostrophes. The standard pattern is to treat the two partners as a single unit—a couple—and put an apostrophe only after the last name: “John and Jane’s villa,” “Ben & Jerry’s ice cream.” Add more owners and you still use only one apostrophe: “Bob and Carol and Ted and Alice’s party.”

If each person owns his or her own item, then each owner gets an apostrophe: “John’s and Jane’s cars“ (each of them separately owns a car).

But when you begin to introduce pronouns the situation becomes much murkier. “Jane and his villa” doesn’t sound right because it sounds like Jane and the villa make a pair. The most common solution—“Jane’s and his villa”—violates the rule about using the possessive form only on the last partner in the ownership. However, most people don’t care and using this form won’t raise too many eyebrows.

How about when you have two pronouns? “She and his villa” definitely won’t work. “Her and his villa” might get by, but if you say “his and her villa” you inevitably remind people of the common phrase “his and hers” with a very different meaning: male and female, as in a sale on “his and hers scarves.” 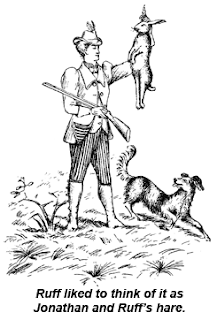