vichyssoise
Waiters in restaurants offering this potato-leek cream soup often mispronounce it “vish-ee-SWAH” in a mistaken attempt to sound authentically French. Setting aside the fact that this soup was invented in New York, French final consonants are not silent when they are followed by an E. The correct pronunciation is “vee-shee-SWAHZ.” 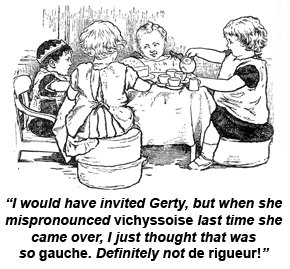 A recent Paul Brians’ blog post looks at usage in a Seattle magazine.