New Podcast Episode Is Up + Order the book and get $4 (and free shippping within the US) + canon/cannon: Common Errors in English Usage Entry for Wednesday, December 2, 2015

New Podcast Episode:
This week on the Common Errors in English Usage podcast, the topic is commas.
Subscribe on iTunes
Download mp3

Order the Book:
End-of-year sale on the book: Use the coupon code FIFTEEN to get Common Errors in English Usage 3rd Edition at $4 off the cover price. Order through wmjasco.com.

canon/cannon
“Canon” used to be such a rare word that there was no temptation to confuse it with “cannon”: a large piece of artillery. The debate over the literary canon (a list of officially approved works) and the popularity of Pachelbel’s Canon (an imitative musical form commonly called a round) have changed all that—confusion is rampant. Just remember that the big gun is a “cannon.” All the rest are “canons.” Note that there are metaphorical uses of “cannon” for objects shaped like large guns, such as a horse’s “cannon bone.” 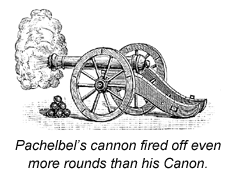 ___________
This is the tenth year of the Common Errors in English Usage calendar. To celebrate, we are bringing back some of our favorite interesting, funny, but sometimes merely silly entries through the years before going on hiatus in 2016.