I/me/myself
In the old days when people studied traditional grammar, we could simply say, “The first person singular pronoun is ‘I’ when it’s a subject and ‘me’ when it’s an object,” but now few people know what that means. Let’s see if we can apply some common sense here. The misuse of “I” and “myself” for “me” is caused by nervousness about “me.” Educated people know that “Jim and me are goin’ down to slop the hogs,” is not elegant speech, not “correct.” It should be “Jim and I” because if I were slopping the hogs alone I would never say “Me is going. . . .” If you refer to yourself first, the same rule applies: It’s not “Me and Jim are going” but “I and Jim are going.”

Trying even harder to avoid the lowly “me,” many people will substitute “myself,” as in “the suspect uttered epithets at Officer O’Leary and myself.” Conservatives often object to this sort of use of “myself” when “me” or “I” would do. It’s usually appropriate to use “myself” when you have used “I” earlier in the same sentence: “I am not particularly fond of goat cheese myself.” “I kept half the loot for myself.” “Myself” is also fine in expressions like “young people like myself” or “a picture of my boyfriend and myself.” In informal English, beginning a sentence with “myself” to express an opinion is widely accepted: “Myself, I can’t stand dried parmesan cheese.” In all of these instances you are emphasizing your own role in the sentence, and “myself” helps do that.

On a related point, those who continue to announce “It is I” have traditional grammatical correctness on their side, but they are vastly outnumbered by those who proudly boast “it’s me!” There’s not much that can be done about this now. Similarly, if a caller asks for Susan and Susan answers “This is she,” her somewhat antiquated correctness may startle the questioner into confusion. 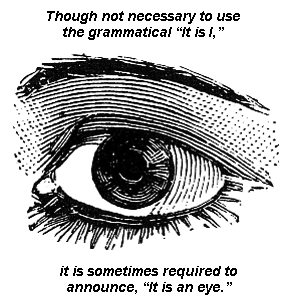