laissez-faire
The mispronunciation “lazy-fare” is almost irresistible in English, but this is a French expression meaning “let it be” or, more precisely, “the economic doctrine of avoiding state regulation of the economy,” and it has retained its French pronunciation (though with an English R): “lessay fare.” It is most properly used as an adjective, as in “laissez-faire capitalism,” but is also commonly used as if it were a noun phrase: “the Republican party advocates laissez-faire.” 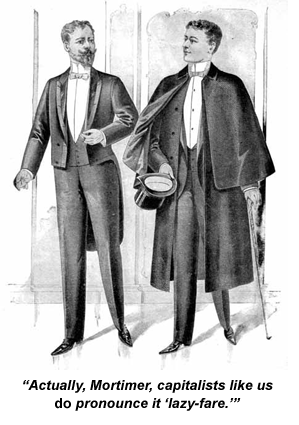 We bid farewell to the podcast some time ago, but you may still listen to all the episodes you may have missed.
Posted by Tom at 12:00 AM

Email ThisBlogThis!Share to TwitterShare to FacebookShare to Pinterest
Labels: Of Foreign Origin, Pronunciation