This Week: Book Sale! Plus, More on the Language of Politics on the Podcast + reactionary/reactive

reactionary/reactive
Many people incorrectly use “reactionary” to mean “acting in response to some outside stimulus.” That’s “reactive.” “Reactionary” actually has a very narrow meaning; it is a noun or adjective describing a form of looking backward that goes beyond conservatism (wanting to prevent change and maintain present conditions) to reaction—wanting to recreate a lost past. The advocates of restoring Czarist rule in Russia are reactionaries. While we’re on the subject, the term “proactive” formed by analogy with “reactive” seems superfluous to many of us. Use “active,” “assertive,” or “positive” whenever you can instead. 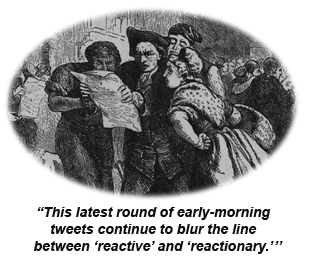 On the podcast this week, we continue our discussion of words related to government and politics, including “red/blue,” “liberal,” “libertarian,” “conservative,” and “reactionary.”