This Week: More Insulting Language on the Podcast + disrespect

disrespect
The hip-hop subculture revived the use of “disrespect” as a verb. In the meaning “to have or show disrespect,” this usage has been long established, if unusual. However, the new street meaning of the term, ordinarily abbreviated to “dis,” is slightly but significantly different: to act disrespectfully or—more frequently—insultingly toward someone. In some neighborhoods “dissing” is defined as merely failing to show sufficient terror in the face of intimidation. In those neighborhoods, it is wise to know how the term is used; but an applicant for a job who complains about having been “disrespected” elsewhere is likely to incur further disrespect . . . and no job. Street slang has its uses, but this is one instance that has not become generally accepted. 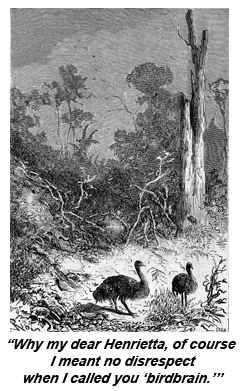 On the podcast this week, we discuss empty heads, full heads, animals, and other topics related to ways to insult one’s intelligence.
Posted by Tom at 12:00 AM