This Week: Reviving "When Is a Rose Not a Rose?" on the Podcast + parallel/symbol

parallel/symbol
Beginning literature students often write sentences like this: “He uses the rose as a parallel for her beauty” when they mean “a symbol of her beauty.” If you are taking a literature class, it’s good to master the distinctions between several terms relating to symbolism. An eagle clutching a bundle of arrows and an olive branch is a symbol of the US government in war and peace.

Students often misuse the word “analogy” in the same way. An analogy has to be specifically spelled out by the writer, not simply referred to: “My mother’s attempts to find her keys in the morning were like early expeditions to the South Pole: prolonged and mostly futile.”

A metaphor is a kind of symbolism common in literature. When Shakespeare writes “That time of year thou mayst in me behold/When yellow leaves, or none, or few, do hang/Upon those boughs which shake against the cold” he is comparing his aging self to a tree in late autumn, perhaps even specifically suggesting that he is going bald by referring to the tree shedding its leaves. This autumnal tree is a metaphor for the human aging process.

A simile resembles a metaphor except that “like” or “as” or something similar is used to make the comparison explicitly. Byron admires a dark-haired woman by saying of her, “She walks in beauty, like the night/Of cloudless climes and starry skies.” Her darkness is said to be like that of the night.

An allegory is a symbolic narrative in which characters may stand for abstract ideas, and the story conveys a philosophy. Allegories are no longer popular, but the most commonly read one in school is Dante’s Divine Comedy in which the poet Virgil is a symbol for human wisdom, Dante’s beloved Beatrice is a symbol of divine grace, and the whole poem tries to teach the reader how to avoid damnation. Aslan in C. S. Lewis’ Narnia tales is an allegorical figure meant to symbolize Christ: dying to save others and rising again (aslan is Turkish for “lion”). 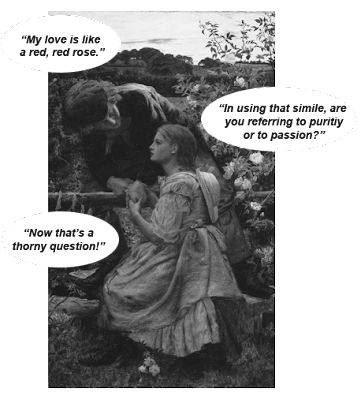 On the podcast this week, we go to the archives to rebroadcast Paul's discussion, “When Is a Rose Not a Rose?”
Posted by Tom at 12:00 AM