This Week: More Contranyms on the Podcast + fit the bill/fill the bill

fit the bill/fill the bill
Originally a “bill” was any piece of writing, especially a legal document (we still speak of bills being introduced into Congress in this sense). More narrowly, it also came to mean a list such as a restaurant “bill of fare” (menu) or an advertisement listing attractions in a theatrical variety show such as might be posted on a “billboard.” In 19th-century America, when producers found short acts to supplement the main attractions, nicely filling out an evening’s entertainment, they were said in a rhyming phrase to “fill the bill.” People who associate bills principally with shipping invoices frequently transform this expression, meaning “to meet requirements or desires,” into “fit the bill.” They are thinking of bills as if they were orders, lists of requirements. It is both more logical and more traditional to say “fill the bill.” 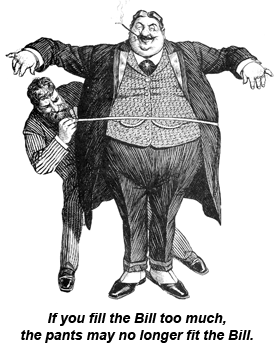 On the podcast this week we return to our conversation about contranyms, words that mean two very different things at once.
Posted by Tom at 12:00 AM