This Week: Photography on the Podcast + A.D.

A.D.  “A.D.” does not mean “after death,” as many people suppose. “B.C.” stands for the English phrase “before Christ,” but “A.D.” stands confusingly for a Latin phrase: anno domini (“in the year of the Lord”—the year Jesus was born). If the calendar actually changed with Jesus’ death, then what would we do with the years during which he lived? Since Jesus was probably actually born around 6 B.C. or so, the connection of the calendar with him can be misleading.

Traditionally “A.D.” was placed before the year number and “B.C.” after, but many people now prefer to put both abbreviations after the numbers.

All of these abbreviations can also be spelled without their periods. 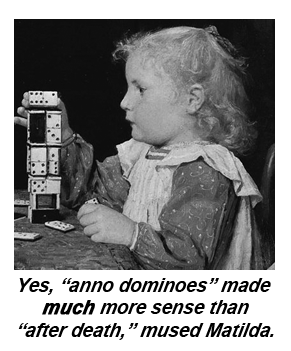 On the podcast this week, we discuss one of Paul Brians’ favorite topics: photography.
Posted by Tom at 12:00 AM