This Week: More on Disease Names on the Podcast + downfall/drawback

downfall/drawback
A downfall is something that causes a person’s destruction, either literal or figurative: “expensive cars were Fred’s downfall: he spent his entire inheritance on them and went bankrupt.” A drawback is not nearly so drastic, just a flaw or problem of some kind, and is normally applied to plans and activities, not to people: “Gloria’s plan to camp on Mosquito Island had just one drawback: she had forgotten to bring her insect repellent.” Also, “downfall” should not be used when the more moderate “decline” is meant; reserve it for ruin, not to designate simple deterioration. 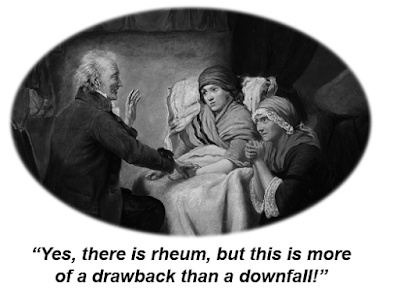 On the podcast this week, we finish our discussion of antiquated disease names.
Posted by Tom at 12:00 AM No comments:

This Week: More on Disease Names on the Podcast + Old English

Old English
Many people refer to any older form of English as “Old English,” but this is properly a technical term for Anglo-Saxon, the original language in which Beowulf was written. Norman French combined with Old English to create Middle English, one form of which was used by Geoffrey Chaucer to write The Canterbury Tales. By Shakespeare’s time the language is modern English, though it may seem antique to modern readers who aren’t used to it.

There are many “Old English” typefaces which have nothing to do with the Old English language. 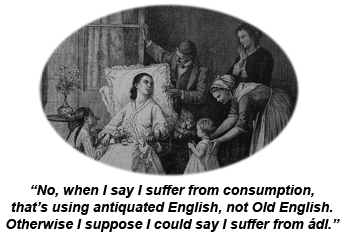 On the podcast this week, we talk some more about antiquated disease names.
Posted by Tom at 12:00 AM No comments:

This Week: More on Disease Names on the Podcast + disease names

But the public has not always followed this rule. “Alzheimer disease” is still widely called “Alzheimer’s disease” or just “Alzheimer’s.” Only among professionals is this really considered a mistake.

“Down syndrome,” named after John Langdon Down—originally written “Down’s syndrome”—has been so often mistakenly written without its apostrophe as “Downs syndrome” that many people conclude that the syndrome’s discoverer must have been named “Downs.”
Although some professionals write “Huntington disease”—originally “Huntington’s chorea”—many still write “Huntington’s.” But another popular name for this illness is “Woody Guthrie’s disease” because the folksinger actually had it, though one also occasionally sees “Woody Guthrie disease.”

Lou Gehrig’s disease, named after its most famous sufferer, always bears an apostrophe-S because professionals prefer the rather more cumbersome but nonpossessive “amyotrophic lateral sclerosis” (ALS).

The best practice is to follow the pattern prevalent in your social context. If you are a medical professional, you’ll probably want to avoid the possessive forms.

“Legionnaires’ disease” has its apostrophe at the end of the first word because it was first recognized among a group of American Legion members celebrating the American Bicentennial. Specialists consider it a severe form of Legionellosis, caused by the bacterium Legionella pneumophila.

Lyme disease should never be written “Lyme’s disease” because it is not named after a person at all, but after the village of Lyme, Connecticut. 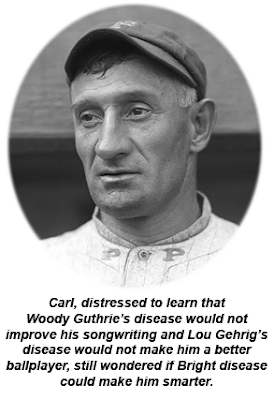 On the podcast this week, we talk some more about antiquated disease names.
Posted by Tom at 12:00 AM No comments:

This Week: Disease Names on the Podcast + frankly

frankly
Sentences beginning with this word are properly admissions of something shocking or unflattering to the speaker; but when a public spokesperson for a business or government is speaking, it almost always precedes a self-serving statement. “Frankly, my dear, I don’t give a damn” is correct; but “Frankly, I think the American people can make their own decisions about health care” is an abuse of language. The same contortion of meaning is common in related phrases. When you hear a public figure say, “to be completely honest with you,” expect a lie. 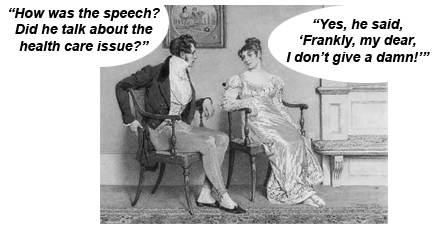 On the podcast this week, we talk about antiquated disease names.
Posted by Tom at 12:00 AM No comments:

scan/skim
Those who insist that “scan” can never be a synonym of “skim” have lost the battle. It is true that the word originally meant “to scrutinize,” but it has now evolved into one of those unfortunate words with two opposite meanings: to examine closely (now rare) and to glance at quickly (much more common). It would be difficult to say which of these two meanings is more prominent in the computer-related usage, to “scan a document.”

That said, it’s more appropriate to use “scan” to label a search for specific information in a text, and “skim” to label a hasty reading aimed at getting the general gist of a text. 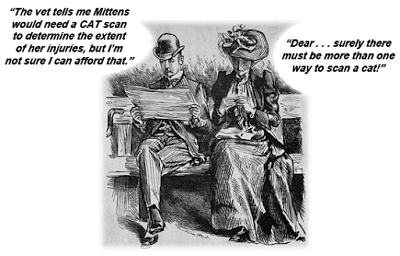 On the podcast this week we conclude our conversation about contranyms, words that mean two very different things at once.
Posted by Tom at 12:00 AM No comments: